Why Raccoons Can be Dangerous 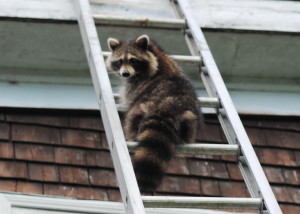 Raccoons can do several things with their paws including uncovering the garbage bin. They are also witty in learning to stay in areas inhabited by people and fit in. Some people are not happy with this idea of them living around people. This is because once these animals become used to being around people, they can become problematic.

Raccoons are generally nocturnal by nature so they are rarely seen during the day. They can be destructive both in and outside the house. They can make their place of dwelling in the attic and even chimneys such that you will need to do something to eliminate them for they will have become a nuisance. They will also increase the litter in your home with their feces and smell from their urine.

Wild animals are unpredictable because there is a barrier of communication. We cannot relate to the animals, just as they cannot understand, comprehend, or relate to us. This makes them dangerous. Wild raccoons are no different. As a wild animal, they can become aggressive if they feel threatened, or if they are defending their nest. Raccoons have paws that are similar to human hands, except they have long sharp claws that help them with hunting, climbing, and self-defense. They can use these claws to scratch and injure humans and other animals. This is why it is so risky approaching a raccoon in the wild. If they are scared, they are likely to attack.

Raccoons can also bite, which is not a good situation considering they are carriers of multiple contagious diseases. Raccoons can pass along bacterial and viral illnesses to humans and outdoor pets if they bite. Their saliva and urine are huge danger zones for disease. For dogs, both diseases are fatal, which is why vaccinations are so important. One of the most common is raccoon roundworm. Rabies, Distemper, Giardia, and Leptospirosis are other fatal and severe diseases that can be transmitted by raccoon droppings or urine. Raccoon droppings look very similar to a canine’s deposits. Most often, they also contain undigested berries. This is generally a tale-tell sign of raccoon feces. The feces can also create airborne spores that, if inhaled, can be transmitted or cause serious respiratory problems, like Histoplasmosis. Other diseases include Canine Hepatitis, Parvo, and Leptospirosis.

Raccoons may look harmless, but don’t be deceived. These bandits are actually very dangerous, especially to your pets.They can be unpredictable and attack you or another person, or child, and cause permanent damages.

At flywhite.ca you can find articles about a variety of business related topics. You can also sign up and submit your own articles and take part in the discussion. So join us!